Looking for death metal/metalcore bands but read the description

I have no idea where to put this request. I'm an aspiring metalcore vocalist, so I might form my own band based on my tastes in geekery because there's probably nothing to offer at the table. I am a pretty finnicky person when it comes to music. I'm a metalhead, but I'm also what you'd call a geek. I have been searching far and wide (yes, a Pokémon reference) for metal bands that cater to my tastes, but I've only found a few. The lyrical content that I am seeking for are as follows.

-Bands with refined or high vocabularies (even Shakespearean dialect would be fine!)

-Songs/bands inspired by Stranger Things (NOT 80's or D&D inspired bands, bands actually inspired by the Netflix series. There's a metalcore group in my area that had a vocalist who dressed like Eleven {she did some amazing death growls} but it was only a comedy stunt and their recordings aren't online)

-Songs/bands inspired by Breaking Bad (NOT meth, songs actually about the show or songs that are pretty much an ode to Walter White)

-Songs/bands inspired by the Marvel Cinematic Universe (Sorry, Iron Man by Black Sabbath, you came out BEFORE the MCU was a thing and I prefer my songs to growl about The Avengers)

According to my tastes, here are the bands that were suggested to me via Google:

-The Contortionist (I like them, but their content is mostly about space and aliens and more "sci-fi" than scientific)

-Hoth (A Star Wars-inspired blackened death metal band, the only song I like from them is "The Rancor")

-z3roc00l (ditto about their discography)

-Stovokor (a Klingon death metal band; like z3roc00l, ditto about their discography)

-Powerglove (again, I prefer death growl lyrics ABOUT said topics and this band is just instrumental songs from the franchise)

-The Ogre Packet Slammers (they're slam, not death or metalcore, and like z3roc00l and Stovokor, ditto about their discography)

-xxSpongecorexx (it's just Spongebob quotes set to a "slam/metalcore" soundtrack. No growls about the dankest sponge in the sea.)

-Spinal Tap, Dethklok, Green Jelly (out of all three, Dethklok is the only one that suits my needs, but it's more "serious cartoon soundtrack" than "a song about memes and nonsense")

-For some reason, Slipknot

Bands that are not metal that were recommended to me but fit my needs perfectly:

-Panic! at the Disco (both old and new)

-Flight of the Conchords

If only the following artists were supported by hardcore guitar riffs and intense drumming, with their vocals perfectly growled...

All bands should preferrably be American/British with Finnish and New Zealander bands also preferred.

UPDATE: I'd prefer if the bands use the "least metal words" from this research project frequently. 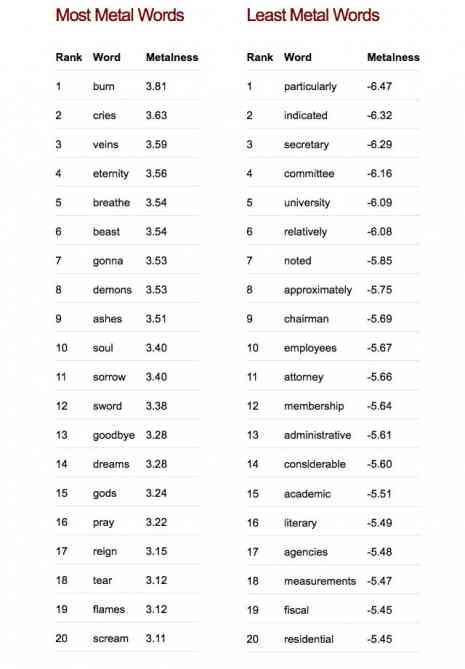 1 answer to this question

This topic is now closed to further replies.
Sign in to stalk this
Stalkers 0
Go To Question Listing
×