Immortal Bird have been on my radar for some time now.  Having thoroughly enjoyed their debut full length of 2015, 'Empress/Abscess' (and their debut EP - 'Akrasia' some 2 years earlier) I have been eager to see what their sophomore full length would offer.  The label I commonly see applied to the band is of a "blackened crust/sludge metal" description which whilst accurate for the fledgling part of their career does not by any means cover the plethora of styles, genres and sounds explored on 'Thrive On Neglect'.  I always hate writing how much a band have matured as I always feel it sounds condescending, but here the phrase is perhaps never more applicable.  Immortal Bird have honed their  playing ability to a level of sophistication most bands can only dream of.  Whilst the album is undoubtedly the familiar band sound throughout, there is so much variety to the pace of the record that compliments the more technical parts perfectly that it is impossible to not be enamoured with the content.

There's still enough "biff", "pow!" and "clank" here to give Batman and Robin a run for their money.  Opening track 'Anger Breeds Contempt' blasts off the record in furious enough a fashion but even within the three and half or so minutes of this attention grabbing track there's layering going on, creating constant build as well clever additions of atmosphere with the bass.  This early sense of structure is a theme prevalent throughout the whole record.  At the same time the almost "n'roll" feel towards the end captures the fun element of the band's sound perfectly also.

'House of Anhedonia' is where things start to get to a format, structure and texture akin to the styles of the Krallices of this world.  The build here feels almost tidal to start with as the track is allowed some slack to build but is never allowed to race away recklessly, always being kept on tight enough a leash to show the progression.  When it rips, it fucking rips, giving a stark and yet near harmonious juxtapose to the overall structure.  This is a well written track from start to finish, teasing the listener, keeping them guessing, working the crowd whilst unleashing fury in well rationed amounts. 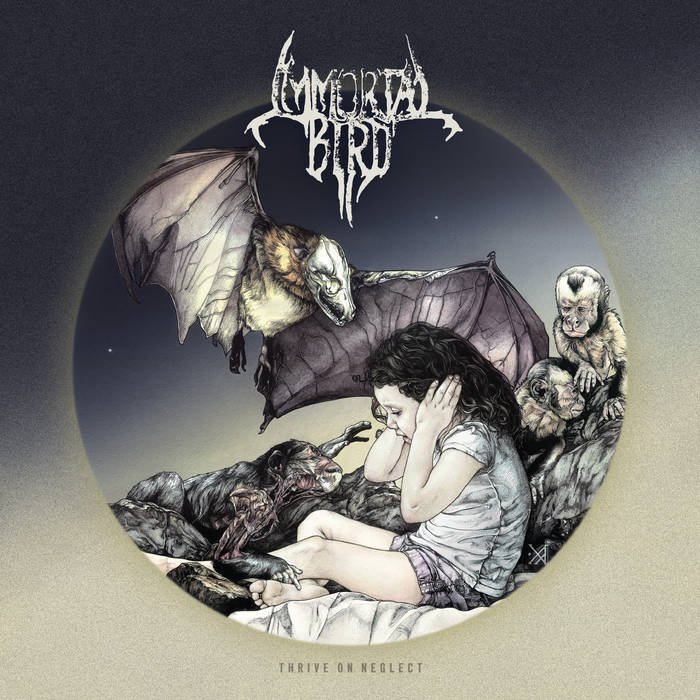 Third track 'Vestigial Warnings' picks up immediately where we just left off only this time we have a more choppy feel to the riffs that couple seamlessly with those near mathy rhythms.  Again the pace is cleverly tempered here with a mid-section to the song that allows for breath yet lets the structure really shine.  Rae's vocals sit as demented, blackened iterations throughout, even with time changes, pace changes and atmospheric ludes, they are still the harsh and abrasive core of the measured chaos in which they sit.

By the time we get to 'Avolition' there's still two overriding themes to this record.  Firstly, it is still building even at track four, still improving with each new track.  By comparison the other dominant force here is the confidence of the artists in the band.  They sound like a cohesive unit.  Picillo's bass rumbles along, never becoming "twangy" or overbearing.  The drums sit perfectly in the mix, driving the sound along but letting Madden's riffs and melodic moments shine perfectly.  Dave Otero did an amazing job here with the production of this record and the freedom of the instruments is never better exemplified than on 'Solace in Dead Structures' with its atmospheric build into a tempest like maelstrom of a composition.

I just can't praise Immortal Bird enough here.  Every once in while a record comes along that challenges me as a listener to absorb more than one style, expect the unexpected and still formulate the record into some cohesive whole in my brain.  Despite all the power of the almost avant-garde divisiveness of IB on their fourth offering, it does still feel like a whole offering, one that can be digested in as many sittings as required by whoever's palate needs satiating.  There's nothing showy here, it just sounds like a band who have done their time on the road, learned from it and took all their experience and ability into the studio with them and through organic process come out of the other side with a real gem.  As I sit here listening to the (literal) bend of the track that closes the album I feel educated, like I have learned something new about both metal and Immortal Bird.