After a few changes of band name, Valgrinder and Prokrustes Thanatos eventually settled on the name Förgjord (Swedish for 'destroyed') and since 2001 have been releasing demos, compilations, full lengths and splits.  "Ajasta Ikuisuuteen" was the debut full length release from 2008 on Hammer of Hate Records and is probably not a record you would hear discussed in the same pages as releases from Horna, Behexen or Beherit.

The most prominent factor in the sound of "Ajasta Ikuisuuteen" is its barbaric crudity coupled with a clunky and cumbersome sense of melancholic melody, delivered at times with an almost obvious lack of playing skill and instrumental prowess.  After the instrumental opening of "Alkusoitto" with its vaguely entrancing draw, pulling you into some dark, dank and fathomless void you are straight into the slow picked intro to "Kristuksen Malja, Ruumis Ja Veri" with the off kilter timing of the picked strings that eventually start to build cleverly into a solid riffing pattern over spoken word incantations, that eventually gives way to authentic second wave tremolo guitar riffs as good as any Norwegian outfit could deliver.  It sounds bewildering to describe but in fact comes together really well.

As clunky and awkward as the track sounds to start with the pacing is done well, creating a great sense of an increase of intensity whilst thundering along with some good ole' fashioned punky undercurrent at the same time.  The instruments sit very well in the mix, considering that production values are not top of the agenda here, even in the midst of the frantic pace, double layered vocals and suffocating melancholy of "Veljeskunta" you can hear the motoring of the bass whilst still being aware that the drums are still there (perhaps low in the mix or maybe just a little bit bordering on the lost side of things) tapping along as required. 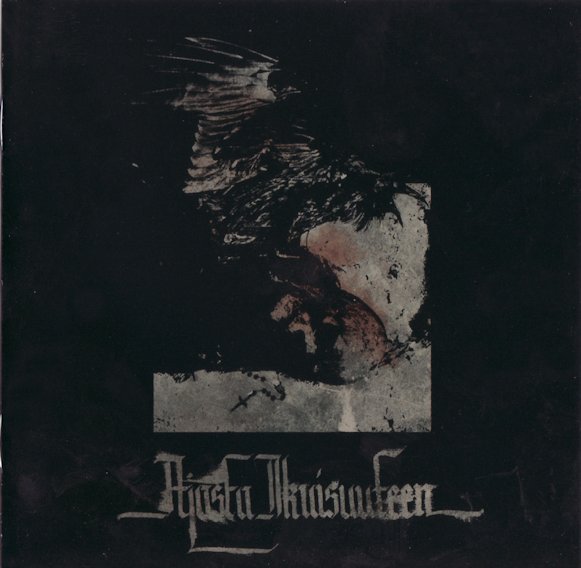 As the pace changes in "Suohauta" show, Förgjord can work really well as a cohesive force without necessarily having to be masters of their instruments.  They are even happy to throw in an atmospheric piano outro to the track to add some further depth to the sound.  Vocally you get some pretty standard Black Metal croaking for your buck here, but these croaks are delivered with sufficient venom to remind you that these are not the ramblings of some insane old man, they are the sputum laced rasps of a band in their prime, sharing their Satanic devotion in a frenzied and authentic manner.

With its use of song structure, the record feels like it is more melodic in direction than it actually comes across as being in reality.  The more melancholic and icy cold piano and slow picked sections don't ever seem out of place, however limited they are in range or skill, even when they appear during the progression of a fast-paced BM assault of a track.  The primitiveness seems to add to the melancholy and atmosphere without detracting from the more forceful passages of the tracks.

I think the real treat in "Ajasta..." lies in the layers that you have to peel back like some ghastly autopsy on a leathery, decayed corpse.  There's some real work involved in places to get under the skin but you surprisingly find flowing streams of life hidden beneath the hide.  In other places the flesh appears to fall away easier only for you to find that there are still some horrific sights, smells and sounds that are as putrid as they look at first glance.