Could any list of 'essential' FInnish BM releases be complete without the first full length venture of Impaled Nazarene present?  Not that this is an easy listen by any means, even for the most extreme-loving metalhead, 'Tol...' is a full on assault that takes some unpicking before you can recognise the dexterity behind the slashes and blows it deals.

Upon first hearing this some five years ago, I immediately dismissed it.  Not because of the sound  but more due to the structure of the album.  It had no flow, no cohesion and no rationale as a result.  The fact is that this is one of the main raison d'etres of the record.  This isn't meant to be an orderly, structured affair.  'Tol Cormpt Norz Norz Norz' is supposed to be an explosion of chaos, a nailbomb of perverse occult worship detonating in the ears of the listener.  Nobody was ever supposed to feel comfortable listening to Black Metal and in that regard this delivers.  'Tol...' is one ugly looking, sounding and feeling motherfucker of a record.

If you need structure in your life then the only comparison I can think to give is to say that 'Tol...' is put together like a grind record.  Short, sharp and abrasive bursts of musicality are interspersed with horrifying sounds of ritual sacrifice, occult procreation and hellish mantras.  It is perhaps metal's one and only BM/Grind album in structure at least.  It is cluttered to say the least yet the jumble and litter all has relevance and contributes to the aesthetic well. 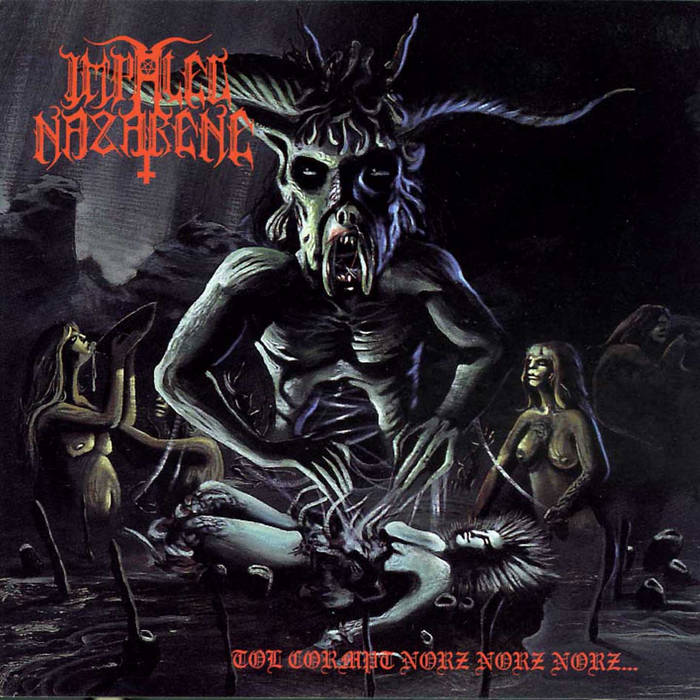 It's claustrophobic, demented and at times downright terrifying.  Yet somehow the mix lends the drums and vocals centre stage (on the actual music tracks) and as a result the traditional cold feel associated with BM is somehow warmer in atmosphere, like some vigorous worship is in constant performance against a backdrop of intense flames.  The production job is actually quite good considering the genre and year this was released in.  Although raw sounding, the uptempo pace of the tracks are solidified superbly by the drums and vocals being pinned at the core of the sound giving them more depth than the abrasive riffing might suggest available.  At times it sounds like a death metal record but its delivery is recognisably BM, dripping with misanthropy and hatred throughout.

There is question about how seriously Impaled Nazarene should be taken with some identifying them as a band merely making a parody of the BM scene (they even stopped wearing corpse paint after deeming it "too trendy").  Regardless of the meaning behind the intent of the artist, 'Tol...' delivered a wake up call to the BM scene in 1993 that continues to alienate and astound new listeners in equal measure to this day.