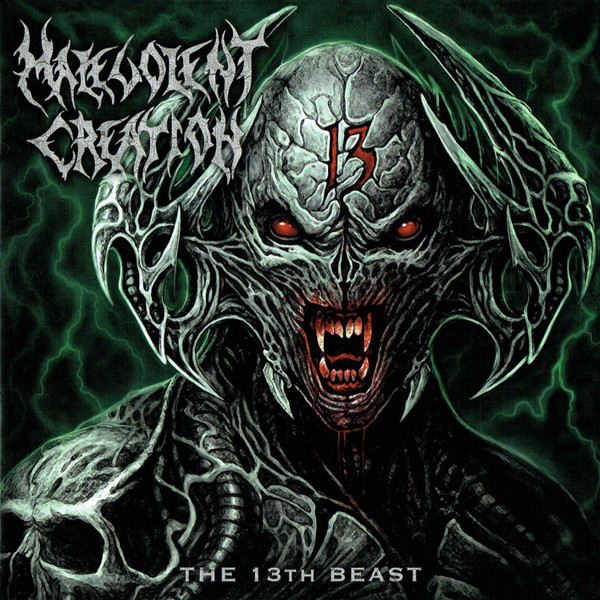 There's life in the old dog yet it seems.  In terms of original members only Phil Fasciana remains in the ranks of Malevolent Creation now and after the passing of Brett Hoffman last year you could almost forgive fans for thinking the curtain had fallen on Malevolent Creation.  The fact is that whilst "The 13th Beast" reinvents no wheels it does exhibit the sound of a band in the throes of something of a regeneration phase.  There's nothing tired sounding here, no dull interludes to build unnecessary atmosphere.  As soon as the spoken word intro to "End the Torture" finishes it is straight up thrashing death metal until the very end, some 11 tracks later.

Although all debuting in the Malevolent full length stakes here, the 3 musicians that join Fasciana on this record are all clearly capable and qualified purveyors of their art form.  Again, I highlight that this is not far above your average DM record yet it is so assured and solid you can easily forgive it to some degree.  Lee Wollenschlaeger gives a good acquittal of himself as an established and competent vocalist, filling Hoffman's shoes nicely.  Phil Cancilla is a machine on those skins, blasting his way across the soundscape yet also using the percussion well when the occasional let up in the pace permits.  Fasciana and Wollenschlaeger work well together to keep the chug of the riffs motoring along whilst Gibbs plonks, twangs and rumbles his way through every track, allowed to be heard in the mix and show his variety without ever showboating.  For a band together for only 2 years as a four piece they sound tight and committed.

There's no metal fan worth the denim their patches are sewn onto that doesn't look at that album cover and mouth a "fuck me, dude!"  I mean, come on, it is fucking awesome.  Like a more ornamental Predator head on a ghostly green background.  I love it when album covers are matched by the content of the record inside, and whilst there are obviously some shortfalls here, still in the main "The 13th Beast" delivers.  When they keep the track length short and succinct, Malevolent Creation are at their best.  "The Beast Awakened", "Agony for the Chosen" and "Knife at Hand" all kick serious ass.  By the same token "Born of Pain" at nearly 7 minutes long doesn't really do anything or go anywhere to justify the length attributed to it.

Overall, I would have preferred a shorter record.  At 11 tracks the band cover a lot of ground in under 50 minutes but not all of it really needs treading.  That withstanding, never does it get grating and still the accessibility factor remains consistent enough to forgive the extra excursions present.

So, having started slowly, January 2019 has finally delivered something worthwhile and a first physical purchase also of a new release for this year.  3/5