The roar has always been approaching.  As far back as three years ago when Altarage dropped their debut full length 'Nihl', this scribe could already hear the threat of their ability, feel the menace of their presence from over hills far away and sense the nefarious intent as the raw fury howled over my skin.  Sophomore effort 'Endinghent' further cemented the prowess of these blackened death metal Basque country residents.  Although slightly less of an impact than the opening salvo of 'Nihl' it was obvious throughout their second offering that Altarage were refining their strategy and making the style of attack more calculated.

Album number three is no longer an approach though.  It's an arrival.  Arguably now on a par with the bastion of death metal chaos that are Portal now, Altarage are right up there with their own stamp on the principles of this most unwelcoming and inaccessible form of extreme metal.  What they did so well on 'Nihl' was shift multiple times the pace, atmosphere and direction of a track.  Doing so with such effortless and frankly unexpected subtlety that I just could not be anything but astounded.  At the same time they could drop a grinding slab of unrelenting, blackened fury with scant regard for pacing or measure and still have my jaw on the floor.  'The Approaching Roar' takes those foundations and adds maturity, dexterity and skilled songwriting to them to produce some complex and yet - in parts - more accessible pieces of Altarage. 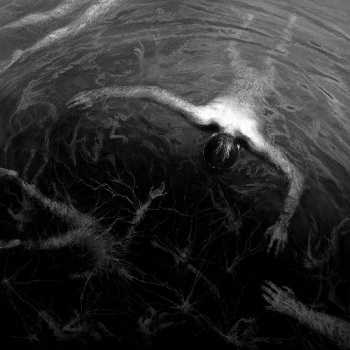 Last year's Portal release 'Ion,' saw the band's sound lifted out of the traditionally murky depths that familiarised their sound, in favour of a more coherent aesthetic - which worked well.  Altarage are still firmly writhing in their own filth and murk here, despite the odd glimpse of a clearer stab of accessibility.  The menacing flamenco promise of the acoustic intro for opening track 'Sighting' is the first flash of this but in mere seconds the full on face stripping fury that we all know is coming is right there, detaching retinas and bursting ear drums.  Even just one track in, the shifting/morphing of pace is obvious and the hidden melody of the final minute is reminiscent of your mum playing Smooth FM in the another room, just audible over the chaos that envelopes you at that time.

'Knowledge' is a big, chunky riffing monster of a track that builds like an army getting into formation for some devastating attack on the enemy.  'Urn' takes a brave step at track number three on the record by building a hazy and funereal intro that sounds like a dial slowly being notched up over a couple of minutes.  Eventually (of course), the gates of hell themselves are then flung open with abrasive vocals and churning instrumentation.  It is at this point that I first fell the drums are a little to low in the mix sometimes, stifled of air a bit by being a part of the roaring chaos as opposed to being allowed to breath a little at times.  Again the song-shifting occurs here with the final two minutes of the track being some of the most coherent Altarage to date.

As you take in the ebb and flow of 'Hieroglyphic Certainty' and obscure grinding riffs and tribal percussion of 'Inhabitant' it occurs to you that this listening experience is akin to a very cleverly engineered virus, the strain of which threatens to consume your entire existence.  The deftness of the structure of 'Chaworos Sephelin' with its haunting, lo-fi cello tinged atmosphere that gives way to the crashing fury of waves of pummelling riffs and percussion is a joy to behold.  The final two tracks finish the album just as we started it, still full of ideas and dripping with the promise of still better things to come.

Altarage might be shrouded in mystery with their secretive nature (the Members tab on their page of Encyclopaedia Metallum says "none") but the music that they deliver shows them sharing only the most potent and valuable artefacts from the darkness which they inhabit.  The roar is now and always will be with you.