Up until two weeks ago, I hadn't even heard of Mizmor.  One look at that cover and I had this record in my ears within thirty seconds.  Good album artwork should pull you into a record, give some promise of what lies beneath but then also not give everything away.  The songwriting, like the artwork, follows this thesis perfectly.  I have listened to this everyday since discovery and I am still learning more and more about it.

'Desert of Absurdity' sets the tone perfectly with its acoustic picked strings like some desolate flourish that seeps into the harsh and abrasive wall of blackened sludgy guitars before equally acerbic vocals add a further layer to proceedings.  The unmistakable BM influence rides high in the saddle for the majority of the opening track, charging at the listener yet the reins are held tight enough to always give a sense of control.  When the pace does let up, it brings in the harrowing and melancholic doom influences that are balanced so well they give a real feel of transition and growth to the track.  Even at over ten minutes long the track never gets boring.  As it progresses through BM to death/doom soundscapes it all just keeps the attention effectively throughout. 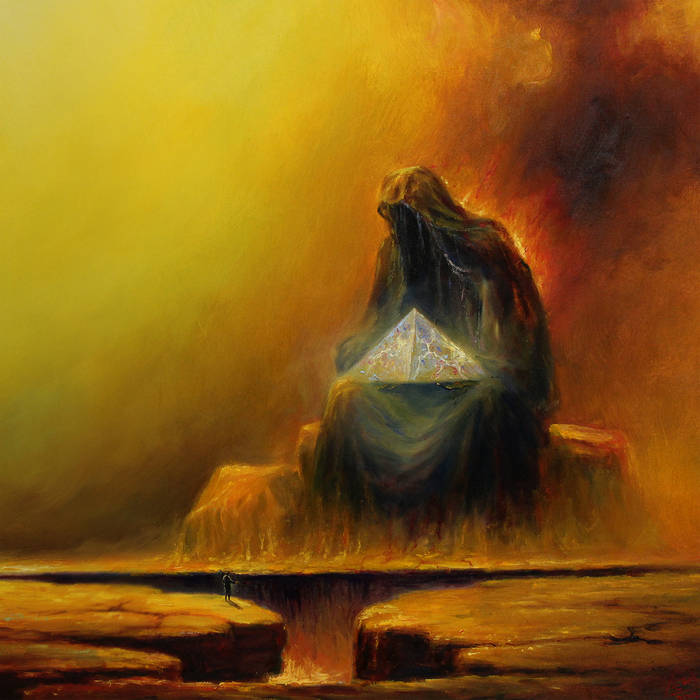 The most memorable part of the entire four tracks on this record are the banshee-esque howls that sit at the start (proper) of 'Cairn to God'.  They are so penetrating and incisive that they shatter my very aura every time I listen.  I sit through the atmospheric intro, waiting for them to blast me with their astringent allure like some small piece of prey who knows there's nowhere to hide and the game is up.  The doom influence sits much higher here than on the opening track, which on a piece that runs over eighteen minutes is hardly surprising.  The start, stop use of the riffs to structure around the vocals works really well, giving a real sense of build to proceedings.  Punishing though this creation is it is equally as captivating.

Mizmor means "psalm" in Hebrew and track two certainly feels like a sacred song or hymn that praises the infernal misery of life.  It is a nihilistic anthem for the extreme pessimist to condemn existence to.

'Cairn to Suicide' follows a very similar format to track one.  More aggressive to start but well paced enough to hold the attention.  It holds less memorability for me and that is not necessarily because it is a poorly constructed song, more because it follows such a sprawling and exhausting masterpiece and the brain needs time to adjust.  For this reason I imagine the album plays best as an LP since the vinyl offering comes over 4 discs which would essentially showcase the comprehensive skill on show on each track.

Album closer 'The Narrowing Way' goes heavier on the doom again and is a fitting and clearly expressed end point to proceedings.  There's a lot to take in over the one hour of music on offer here and not everyone will have the patience to sit through it I am sure.  But for those that do the rewards are limitless.  Serious contender for album of the year.