Last Rotting Christ album I enjoyed?  "Triarchy of Lost Lovers".  Last Rotting Christ album I bothered to listen to upon release?  "Aealo".  It is fair to say that the Greek stalwarts of the Black Metal scene now have a sound that rarely ventures into the territory so well tread on "Thy Mighty Contract" and "Non Serviam" but it is also fair to say that "The Heretics" sounds from start to finish like a band who firmly stamp themselves on the metal map for 2019.  What album number thirteen from Rotting Christ does is take a measured approach to variation and repetition to build a memorable and lasting experience.

The sound itself goes from dark and brooding metal and hard rock to almost Gothic metal proportions.  Yet at the same time that familiar melodic warmth remains in situ throughout.  More often than not there's that big soaring melodic riff riding the vocals like a surfer with his board.  "The Voice of the Universe" does this superbly as does "The Sons of Hell".  The overall feel the record as a whole leaves me with is one of ritualistic allure, tracks like "Hallowed Be Thy Name" and "Fire God and Fear" build well like powerful incantations being cited from voluminous tomes, flooding forwards intermittently with flowing dark melodies. 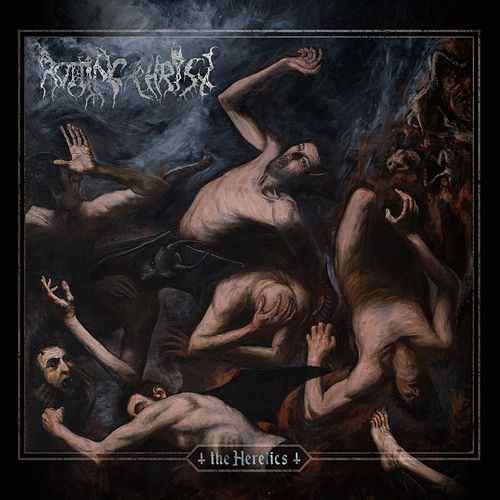 It does remind me a lot of Behemoth ("The Satanist" Behemoth, not last years pompous bollocks Behemoth), with the theme of religion so heavily referenced but at the same time it feels like a much more cohesive effort than recent Behemoth keeping a level of consistency and restraint to the songwriting which holds the attention well.  Only once does the album visit anything like Black Metal on "I Believe", here they base a poem by Nikolaos Kazantzakis at the centre of the chaotic and frantic pace and sadly it fails miserably on my ears, coming across as just filler.  My only other criticism is that it does get a bit samey in places (namely the intros to each track).  Otherwise it is a perfectly respectable piece of dark metal.  C'mon, we can't this black metal anymore folks.