So, my first review of 2019 is of the latest offering from UK legends Venom.  37 years after the debut full length and the band are still active, albeit as a much changed line up from that which recorded "Welcome to Hell".  I'll be honest, I haven't bothered with Venom beyond "At War With Satan", so I really had a blank slate in terms of expectations when I put "Storm The Gates" on this afternoon.

To say it is generic is something of an understatement.  Each track just morphs into the next, displaying no discernible milestones to give any track a shred of memorability.  The instrumentation is capable enough and competently performed but to record 13 tracks of the same structure and format gains no favour with these ears I am afraid.  Riffs become beyond infectious and hit pandemic levels of boredom when given this level of over play.  Yes, they chug and occasionally show real promise of bite but this is fucking Venom guys, not some Friday night cover band down the Rams Head with a £2 a pint Happy Hour.  Where's the menace?  Where's the atmosphere?  And, no I don't expect "Black Metal" part 2 or a follow up to "At War With Satan" but this at times sounds like Cronos is in a band with one of his kids and their mates, all competent musicians but not really doing justice to what is promised by the names involved.

If we look back at 2018 and to Saxon and Judas Priest, we can see easily two acts still writing entertaining and stylistically recognisable material without having to try that hard.  It is hard to make 13 tracks of the same format sound like you are trying too hard, but the fact is that Cronos and Co. are doing such a monolithic job of flogging a dead horse it just comes across as exactly that.  The overarching part of Venom I enjoyed was the fun, (dark) comedy edge to the band - even if they did take themselves seriously when I never could - but this has a real mood hoover run over the shagpile here, sucking any creativity, energy or integrity out for good. 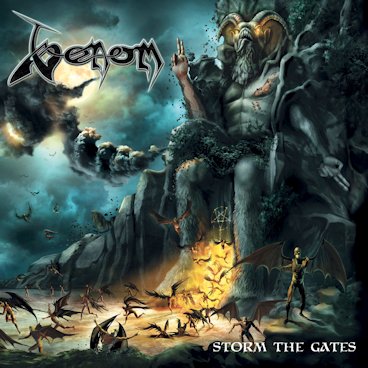 I am supposed to balance my reviews with both positive as well as negative, but I am fucking struggling here folks.  Erm...the artwork is competent and that band logo still gives me pangs of past glories.  That's about as far as I can force the good vibes with this.  So, there you go.  Review number one of 2019 and it is a record that chalks up a rating that means the only way is up from here for the year (although, sadly the same probably isn't true for Venom).