KAMELOT's THOMAS YOUNGBLOOD: 'The Band Has Grown In All Aspects' Since TOMMY KAREVIK 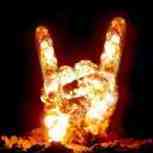